“The trains which traverse the lines of rail beside which the body was found are those which run from west to east, some being purely Metropolitan, and some from Willesden and outlying junctions. It can be stated for certain that this young man, when he met his death, was travelling in this direction at some late hour of the night, but at what point he entered the train it is impossible to state.”

“His ticket, of course, would show that.”

“There was no ticket in his pockets.”

“No ticket! Dear me, Watson, this is really very singular. According to my experience it is not possible to reach the platform of a Metropolitan train without exhibiting one’s ticket. Presumably, then, the young man had one. Was it taken from him in order to conceal the station from which he came? It is possible. Or did he drop it in the carriage? That is also possible. But the point is of curious interest. I understand that there was no sign of robbery?” [BRUC]

The Metropolitan Railway opened its first line to the public on January 10, 1863 (just after Holmes’s own 9th birthday, per Baring-Gould). Of course, by the time we join Holmes and Watson in London, the Underground is already well-established.

My friend rose lazily from his armchair and stood with his hands in the pockets of his dressing-gown, looking over my shoulder. It was a bright, crisp February morning, and the snow of the day before still lay deep upon the ground, shimmering brightly in the wintry sun. Down the centre of Baker Street it had been ploughed into a brown crumbly band by the traffic, but at either side and on the heaped-up edges of the foot-paths it still lay as white as when it fell. The grey pavement had been cleaned and scraped, but was still dangerously slippery, so that there were fewer passengers than usual. Indeed, from the direction of the Metropolitan Station no one was coming save the single gentleman whose eccentric conduct had drawn my attention. [BERY]

[Hat-tip to Leah Guinn and Jaime N Mahoney and their fantastic book, A Curious Collection of Dates: Through the Year with Sherlock Holmes.]

“That would be unnecessary. Three thousand will cover the matter. And there is a little reward, I fancy. Have you your cheque-book? Here is a pen. Better make it out for four thousand pounds.”

With a dazed face the banker made out the required cheque. Holmes walked over to his desk, took out a little triangular piece of gold with three gems in it, and threw it down upon the table.

With a shriek of joy our client clutched it up.

The reaction of joy was as passionate as his grief had been, and he hugged his recovered gems to his bosom.

“There is one other thing you owe, Mr. Holder,” said Sherlock Holmes, rather sternly.

“No, the debt is not to me. You owe a very humble apology to that noble lad, your son, who has carried himself in this matter as I should be proud to see my own son do, should I ever chance to have one.”

Source
Information provided by William S Dorn DWNP, BSI, from his book, A Day by Day Chronology of Sherlock Holmes.

With a dazed face the banker made out the required cheque. Holmes walked over to his desk, took out a little triangular piece of gold with three gems in it, and threw it down upon the table. With a shriek of joy our client clutched it up. “You have it!” he gasped. “I am saved! I am saved!” The reaction of joy was as passionate as his grief had been, and he hugged his recovered gems to his bosom. [BERY]

Source
Information supplied by the volume A Day by Day Chronology by William S Dorn, BSI.

February 19, 1886: Holmes followed the footprints that Arthur Holder and Sir George Burnwell made in the snow. [BERY]

February 18, 1886: Arthur Holder asked his father for money for the third time. [BERY]

Richard Carpenter (left) played Arthur Holder in the 1965 BBC television adaptation of “The Beryl Coronet“. It was the eighth episode of the series starring Douglas Wilmer (as Holmes) and Nigel Stock (as Watson). [Carpenter has another Sherlockian credit, as writer for four episodes of The Baker Street Boys (BBC, 1983) –Selena Buttons]

Could the coronet have looked something like this beautiful bridal coronet by Elnara Niall? 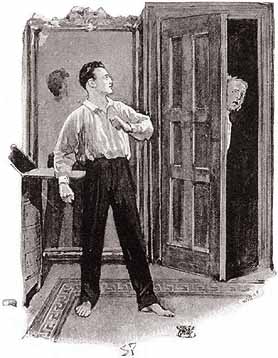 Source: A Day-By-Day Chronology of Mr. Sherlock Holmes: According to Zeisler and Christ by Professor William S Dorn.

February 4, 1886: Arthur Holder asked his father for money for the first time. [BERY]

February 18, 1886: Arthur Holder asked his father for money the third time. (BERY)
Part of the Beryl Coronet was stolen. (BERY)

1886 February 22: The beryl coronet was reclaimed by its owner.  The remainder of February days have no references in the Canon.

While watching a rerun of the Show “In The Heat of The Night” I heard  Police Chief Gillespie say to his chief of Detectives, “All right, Do you want to be Sherlock Holmes?’ Just once I would like to hear Dr. Watson referred to with the respect he is due.

1886 February 20:  Holmes returned the missing part of the beryl coronet to Alexander Holder.