Readers all over the world endured the death of the great Sherlock Holmes, who had become so loved and popular to fans, in the last story in the Memoirs of Sherlock Holmes, published in 1893. A storm of protest could not change the mind of Sir Arthur Conan Doyle. Even his Mother, according to stories passed around, could not bring Holmes back. 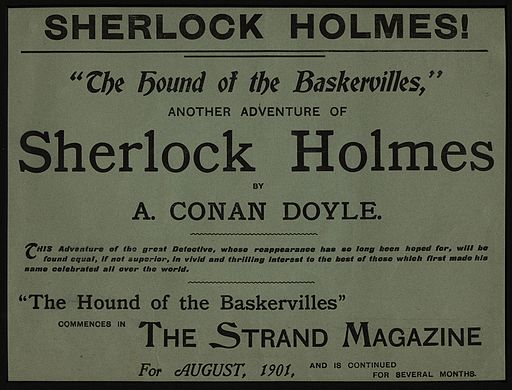 Then, on May 25th, 1901, Newnes’s weekly publication, Tit-Bits (sister publication to The Strand) announced, “Revival of Sherlock Holmes”.

Never mind that the story being published was to be an earlier case of Holmes’s before his fatal encounter at the Falls.

Holmes was coming back.

His most exciting case yet, The Hound of The Baskervilles began appearing in The Strand in August of 1901 and was published as a novel in 1902.

The hope of Holmes was back and hopefully would never go away.

This information comes from A Curious Collection of Dates: Through the Year with Sherlock Holmes by Leah Guinn (JHWS “Amber”) and Jaime N Mahoney (JHWS “Tressa”).

We’ll close with the dedication that appeared in the original book. [Interesting that now there are those scholars who do not believe that this was true in the creation of this tale. -Chips]

This story owes its inception to my friend, Mr. Fletcher Robinson, who has helped me both in the general plot and in the local details.