From A Day by Day Chronology of Mr. Sherlock Holmes according to Zeisler and Christ by William S Dorn:

Our search was not a very long one. The tracks of the tyre began to curve fantastically upon the wet and shining path. Suddenly, as I looked ahead, the gleam of metal caught my eye from amid the thick gorse bushes. Out of them we dragged a bicycle, Palmer-tyred, one pedal bent, and the whole front of it horribly smeared and slobbered with blood. On the other side of the bushes a shoe was projecting. We ran round, and there lay the unfortunate rider. He was a tall man, full bearded, with spectacles, one glass of which had been knocked out. The cause of his death was a frightful blow upon the head, which had crushed in part of his skull. That he could have gone on after receiving such an injury said much for the vitality and courage of the man. He wore shoes, but no socks, and his open coat disclosed a night-shirt beneath it. It was undoubtedly the German master.
Holmes turned the body over reverently, and examined it with great attention. He then sat in deep thought for a time, and I could see by his ruffled brow that this grim discovery had not, in his opinion, advanced us much in our inquiry.

May 18, 1900: Rueben Hayes was arrested in Chesterfield for murdering Heidegger. [PRIO] 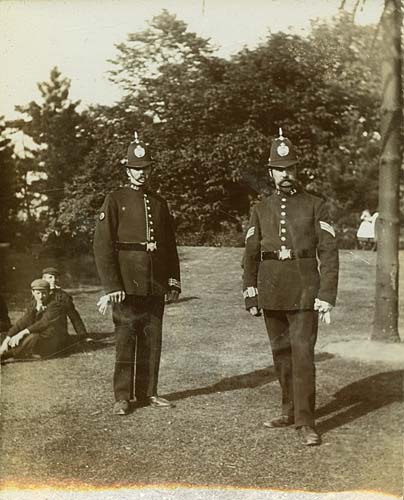 As to Hayes I say nothing. The gallows awaits him, and I would do nothing to save him from it. What he will divulge I cannot tell, but I have no doubt that your Grace could make him understand that it is to his interest to be silent. From the police point of view he will have kidnapped the boy for the purpose of ransom.