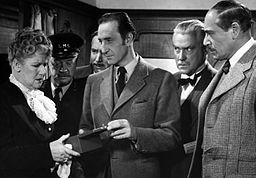 Something a little different today: rather than a Canonical happening, an event in the Sherlockian world 71 years ago today.

February 1, 1946: The world premiere of the film Terror by Night, the thirteenth film (of fourteen) in the Sherlock Holmes series starring Basil Rathbone and Nigel Bruce.

The film borrowed elements from Canonical stories, including poisoned darts from THE SIGN OF FOUR. The film also borrowed from “THE ADVENTURE OF THE EMPTY HOUSE” with the introduction of Colonel Sebastian Moran and the full name of the murdered first victim. The film lastly borrowed from “THE DISAPPEARANCE OF LADY OF FRANCES CARFAX” with the use of an oversized coffin that fits two people stacked up.

Watson was played in typical Bruce style, unfortunately. I liked the film – how about the rest of the Watsonians?